Cucumber mosaic virus, like other mosaic viruses, causes yellow mottling on the leaves and can lead to leaf distortion and plant stunting.

A couple of weeks ago while mowing my lawn, I noticed yellow splotches on the leaves of one of my robust Rozanne cranesbills.  “Looks like some kind of mosaic virus,” I thought to myself.

So I hopped on my computer and started googling away on cranesbill geranium issues.  Within minutes, I discovered that cucumber mosaic virus can attack cranesbills and that it’s often vectored by aphids.  So, I figure that an aphid probably visited the plant, sucked on it, and in the process, infected Rozanne.

Weeds apparently provide a great food and disease source for aphids, and I happen to live between the two weediest yards in the neighborhood.

The virus can also be transmitted via garden tools and gardeners’ fingers, according to The Royal Horticultural Society.  That’s why it’s important to clean tools and hands with soap and water. 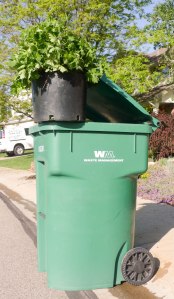 It’s important to dispose of diseased plants to keep them from infecting other plants in the garden.

Worst of all, there’s no chemical control for the virus.

After reading all that, I raced outside, dug up the infected cranesbill, conducted a speedy funeral, and tossed the plant into the trash.  It broke my heart to destroy a gorgeous two-year-old cranesbill.  But it was the only thing I could do.

Next, I checked the four cranesbills surrounding the infected one.  Fortunately, I didn’t see any mottling on the other plants.

Normally, I blast a plant with water to dislodge aphids.  But in this case, I wanted to take more definitive action.  So I whipped out my Ferti-lome Triple Action insecticide/fungicide/miticide and sprayed all of my geraniums, roses and Pawnee Buttes sand cherries.  When I used Triple Action on my aphid-infested sand cherries last year, the plants recovered nicely.

I’ve been growing hardy geraniums, including Rozanne and bloody cranesbill (Geranium sanguineum), for ten years or so, and have never had any problems with them.

My online research indicates that allium can repel aphids.  Interestingly, though, I did have one allium growing near the Rozannes, and still had this mosaic problem.  Maybe I need more alliums.

Other plants that reportedly repel aphids are catnip/catmint, garlic, chives and mint.

I grow Little Trudy catmint next to my roses, and so far, haven’t spotted any aphids on the roses.  All of my roses are own-root roses.  So fortunately, I don’t need to be concerned about another virus– rose mosaic virus—on those plants because that disease attacks only grafted roses.  It’s yet one more good reason to plant own-root roses, such as those sold by High Country Roses.